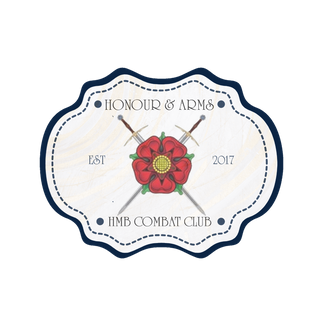 Here at Honour and Arms we respect all histroical disciplines of weaponcraft and embrace those who wish to cross train and parttake in other disciplines . We are also proud to say that The Headsmen Chapter of The Northern Wolves Historical Medieval Battle group is made up of the majority of our members. Training and taking part in Historical Medieval Battle competition across multiple disciplines such as duels, bohurt and profights we embrace the opportunity to put into practise the techniques learnt during study of Histroical European Martial Arts.

WHAT IS HISTORICAL MEDIEVAL BATTLE?

"Historical Medieval Battles (HMB) is a rather young modern sport, full contact fighting with the use of offensive and defensive weapons characteristic of the Middle Ages. Specifically the armour and weapons must be of the style from the dates 1200 to 1699, with location irrelevant.

HMB is a full contact fighting on steel blunt weapons. Fighters are dressed in full armor, which, like the weapons, is made according to historical standards. One person's full set of armour must originate from the same place and within a fifty-year time span. Blows may be aimed at any parts of the body (with the limitations set in the regulations); both wrestling and percussive techniques are permitted.

WHAT ARE THE DISCIPLINES OF HISTORICAL MEDIEVAL BATTLE?

"Historical medieval battle, like any other sport, has several categories. All its categories can be divided into mass and single ones.

Single categories, namely "one vs one" are divided into tournaments and professional fights in  turn. Tournaments points / hits are counted in tournaments (duels); a fighter has to deliver a certain number of blows (usually 10) to his opponent, or gain the maximum number of points within a certain period of time (2–3 minutes).

There is also a category called "Triathlon": three rounds with different weapons, the first one - "longsword", the second one - "sword-buckler", the third one - "shield-sword."

The second "single" HMB category is professional fights. A fight is held in the format of "three rounds of three minutes." According to the rules, any techniques aimed at delivering blows to any part of the body, except for the neck, back of the knee, groin, eyes, feet, and back of the head, if an opponent is bent, are allowed (except for thrusts, which are prohibited in all HMB categories). All other things, including 3-second ground fighting with no active movements of the opponents are allowed.

The rules of mass battles are slightly different. The “kill zones” are the same, but the winner is the one who remains standing on his feet.In addition to these categories, there are some others, such as the "2 vs 2" (which is held in the “deathmatch” mode: several two-member units meet on the lists, the battle is "all against all" and the winner is the two-member unit, of which at least one fighter is on his feet); "10 vs 10" and others. HMB categories often can be created for a specific festival, depending on its objectives and specific requirements of historicity."

HOW DO WE TRAIN FOR HMB?

For HMB we train in accordance with the most effective modern methods of training available in martial arts whilst observing the traditions of the old treatises.  For fitness we take part in crossfit type exercises to help build cardio and strength as fighting in armor,  one needs to be strong and have good coordination of movements. Some of the Martial Arts that aid with our training are:

The following are useful and informative resources for thos interested in Historical Medieval Battle:

Battle Of The Nations

If you want to come down and try HMB then please get in touch in advance of one of our sessions and we will be more than happy to introduce you to the discipline.

We few, we happy few, we band of brothers;

For he to-day that sheds his blood with me

Shall be my brother; be he ne’er so vile,

This day shall gentle his condition;

And gentlemen in England now-a-bed

Shall think themselves accurs’d they were not here,

And hold their manhoods cheap whiles any speaks

That fought with us... 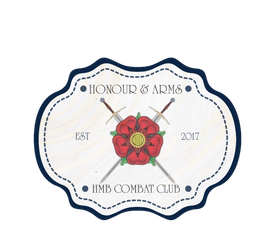 Honour & Arms Club has a mission of broadening the practice and study of Historical European Martial Arts and Historical Medieval Battle.